Papua New Guinea celebrated its 39th year of independence on Tuesday. This is all but a historical footnote in the minds of many Australians, as many of us have forgotten the close association between both countries that began 100 years ago this month when Australia seized the German territory at the commencement of the First World War.

Much has changed since then.

The grand vision of Sir Michael Somare of the opportunity to run their own country has yet to be fully realised with the last two decades chequered with constitutional crisis and at times significant civil unrest.

Extractive industries have become a significant feature of foreign interests in Papua New Guinea since 1975, and corruption has sadly often impacted on the distribution of income.

The country has dropped considerably down in the country ratings of UN Human Development since 1975, and Australia’s Foreign Minister Julie Bishop expressed earlier this year how she was troubled that PNG was not likely to meet one of the eight United Nations Millennium Development Goals before they are due at the end of 2015. 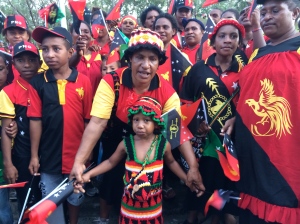 It could be easy to look at PNG and focus only on a grim picture.

What I saw when I was beginning the 10 City Bridge Run in Port Moresby painted a different picture. There were many expressions of national pride, concurrent with alignment with which one of the 32 provinces people originally came from. It is a country with over 840 different language groups, and with just over 7 million people, national unity is an amazing achievement.

Indications is that the country is looking towards good leadership and a bright future. Let’s hope so, because the region needs leadership from Papua New Guinea now.

Enjoy these photos taken of people during Independence.