A Song For My Mum

It has not been an easy year for my mother. For many people it has been difficult. While our family comes to terms with the loss of my brother, my mother is finding these days difficult, and so I asked Luigi to sing for her when I returned to Glasgow.

Luigi is the head chef at the Val Doro Restaurant, which is the oldest chippie in Glasgow. It has been in his family for over 80 years, and in operation since the late 1870’s. An institution. I’m convinced that Glasgow wouldn’t be the same without it. 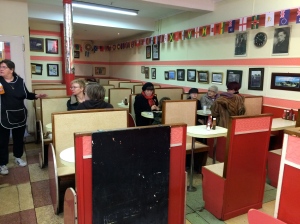 It is a classic chippie. I took this photo when I was running the Glasgow leg. There were less people there the day I dropped by and asked Luigi to sing a song for my Mum.

It would be easy to draw a comparison to some British comedy tv shows, but I won’t. Luigi has a heart of gold. Francis who is the sous chef on shift is every bit as diligent, taking care with the deep fry while Luigi sings.

Make yourself a cup of tea Mum, and enjoy Luigi singing especially for you.

What a lovely thought for your mum, and bravo Luigi!