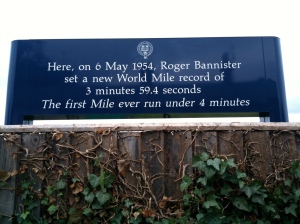 The first photo that appeared on this blog was at the beginning of September 2010, only a few days after I had committed to the journey.

The photo is taken in Oxford, outside of the running track where Roger Bannister broke the four minute mile as a record for the first time.

What is perhaps more telling is the process he used to break this record. It was only made possible with the help of fellow-runners as pacemakers. And this is a most interesting piece of no-so-trivial trivia.

I took this photo while in Oxford in 2009 during the conduct of an earlier ridiculous challenge that I had set myself: the 9 City Bridge Run, where I ran 9 sub-marathons in 9 cities across 9 countries inside of one month. The similarity between the two initiatives that the execution both times left a lot of room for improvement. The 10 City Bridge Run was ‘threaded onto this needle’ in making a patchwork of 100 stories by what I considered to be an unsatisfactory effort in 2009.

How did I miss this important factor in Bannister’s success? In fact, how does this one small fact escape all of our attention?! It is so elementary, yet critical to performance. The help of fellow-runners as pacemakers.

It is no good having those fellow-runners and pacemakers if you are either not listening to them or not communicating to them. It implies an intimate level of trust and teamwork. A common goal. A shared vision.

The good news is that the race is far from over. Bannister, must like others, must have tried dozens if not hundreds of time to smash this record with these pacemakers, or at least trained hard together in practice. Consider the stunt that this 100 patchwork tapestry that I am now blogging about as the practice, and the main event coming in the form of the Design Forum.

Will you share this same impertinent level of audacity that we can, together, smash a world record for the benefit of those most in need?

Delivering on the promise of improving child survival. First, we must know what defines the race, and secondly, how our performance will be measured. We are competing against ourselves, and we must succeed.

This is the second patch of 100 stories that defines the journey I have recently concluded. Leave a comment and let me know how you like my handiwork!

2 thoughts on “Threading The Needle”

The Eagle’s song New York Minute keeps popping up around me at the moment. It’s perhaps pertinent from the point of view of the New York Design Forum theme of team. Bring on ‘team”! We have been able to run beside you in terms of a generosity of spirit and provision of support. Now we can be pacemakers through a demonstration of action. And if we can’t play the role of pacemaker, then a cheer squad is still such an important part of the team. It’s exciting that collaborative opportunities are building momentum! Five years in the making just shows what amazing strength you tap into and how important perseverance is in making a difference. Looking forward to seeing what else emerges in this patchwork!

I remember when studying a feminist discourse of art history that a patchwork quilt was famously sewn as a work of activism by a group of female artists. It challenged a supposedly (and perhaps quite rightly) male-dominated view of the artist as the central artist and the audience as consumers, to one of participation and collective creation. I see some of that work threaded into this initiative too. And I think you are right: the role of pacemaker is not limited to a professional few, but anyone can join the team. The collective bridge is the figure of attention, and the individual is the background to this picture. The question for us all will be do we want to be part of this bridge, and if so, where do we see ourselves contributing? This is both an intensely pragmatic and also personal question. The pragmatism is obvious, but the personal nature is understated, and it is this sense of responsibility I am seeking to encourage. Thanks for being part of this bridge Trish!