The face of child survival

In many respects, for a person who has spent their entire life within the confines of the Western world, the Millennium Development Goals which are soon due to expire can best be measured in images.

The eight MDG are simple and easily defined, which is their best feature.

One of the problems with the MDG has been the need for education of what they actually are. Still today, if you walked down the main street of any capital city of any large Western economy, most people in the street wouldn’t know what you were talking about if you mentioned the MDG.

Too much time and money has been spent explaining and educating these MDG. Most of the publicity campaigns I have seen appeared to look something akin to massive, extravagant, community cake stalls. What outcome was really achieved by all of that?

Like it or not, systemic change requires some degree of education. This is the cost of a new idea.

But here I want to talk about child mortality, the reason behind the 10 City Bridge Run. We are focusing on child survival: the positive side of child mortality.

What does child survival look like? Healthy children. Rather than celebrate it, we take it for granted.

Child mortality largely goes unseen. My friends from Sierra Leone, all who I have met outside of their country in different parts of the world, all are well educated, eloquent, intelligent, and seemingly no different to you or I. There is not a tag around their neck that proclaims they are from the country with the highest rate of child mortality. 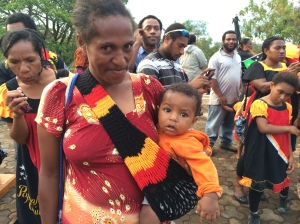 This has been one of the failures of the MDG. They have created an image of something created by large NGOs involved in helping to address these problems through a series of well selected photographs to tug at the heart strings and wallets of people in the West who might fund their causes. It becomes the tool for the charity muggers who provide the customer facing face of these organisations as their massive fundraising and messaging campaigns ramp up.

The stories told through these campaigns create a narrative of the issue. The statistics take on a life of their own. ‘What might that look like?’ we ask ourselves in our mind’s eye.

This post is not about trying to fight the system. Rather, it is about celebrating images of healthy children with healthy mothers. That is the work of the 10 City Bridge Run. There is enough misery to go around. Let’s celebrate life instead.