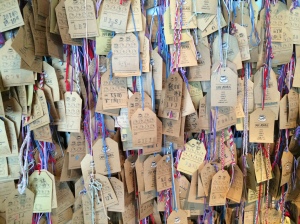 The rhythmic whirring and tapping sounds coming from the life support machines sound like a reassuring metronome. If only it was that idyllic…

The video below is self-explanatory by the comment which accompany the clip from Chris describing his bitter-sweet experience as he sings to his son Lennon following the death of his wife:

Chris Picco singing Blackbird to his son, Lennon James Picco, who was delivered by emergency C-section at 24 weeks after Chris’ wife Ashley unexpectedly and tragically passed away in her sleep. Lennon’s lack of movement and brain activity was a constant concern for the doctors and nurses at Loma Linda University Children’s Hospital, where he received the absolute best care available. During the pregnancy, Ashley would often feel Lennon moving to music so Chris asked if he could bring his guitar into the NICU and play for Lennon, which he did for several hours during the last days of Lennon’s precious life. One day after filming this, Lennon went to sleep in his daddy’s arms.

Can you feel that crushing blow which must have accompanied Chris through this song and for the days, weeks, and years that will follow as he remembers his wife and child?

Many child deaths are irrevocable, and in the West in developed countries this is by and large the majority of incidents of child mortality. My brother’s son Xander is one such case as this. Lennon is another. Some reading this will have a very personal connection with that too, and I write these words with much care because I know that any reminder must be hurtful for you in ways only you could understand.

But what about those in so-called developing countries where we have no visibility of their deaths through YouTube or media? The sadness shared by their parents is no less. And the figure, while diminishing because of improvements in child survival is still too great, still over 16,000 children under the age of five per day. More than 16,000 parents singing their own version of a broken-hearted Blackbird daily. And that is not to mention the large numbers of women who die while pregnant or during labour. Life is a risky business. It is a situation we hope to address through the Design Forum accompanying the 10 City Bridge Run. Join  us.