“The artist cannot be rushed” (Chapter 2) 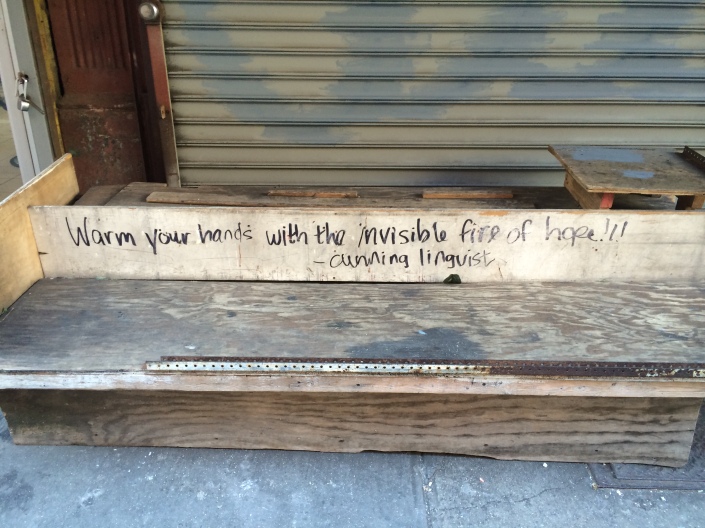 “The artist cannot be rushed”. Is this the worst excuse, ever? Or is this a statement of truth about The Creative Process?

This is an expression that came to mind as I was preparing to depart for a friend’s house party in Sydney’s Northern Beaches earlier this year. My friend had asked everyone to ‘bring a plate’, and we would share the fruits of our collective cooking abilities. I had known about the date of the party for easily three weeks.

In my fridge I had some left over nectarines. A box of apples from the markets was sitting on the dining room table. Prior to Christmas, I had baked a Tarte Tatin apple pie for another party. My friend asked if I would cook the Tarte Tatin pie again. It was the obvious thing to do. It would be simple. And after all, the box of apples was sitting there ready to be used.

But for some reason, I wanted to try something different. My appetite for the creative pursuit took over, and I started thinking about what I could bake. This was a mistake. I was thinking about doing something but never taking action.

I awoke the day of the party later than I had intended. I had just enough time, but not the right ingredients. I realised that I lacked some puff pastry that I would need to cook a Tarte Tatin if I was going to do what was easiest. I needed to find a solution.

As I was trying to work out what to do, my friend Tony texted me. “Would I like a lift?” he offered. A lift! How perfect, and so I accepted. The party was about an hour’s drive by car from Sydney, and a lift would mean that I wouldn’t need to take public transport. One less thing to worry about, but accepting a lift meant that I would would be constrained by the time I had available.

I raced off the go to the shops to buy some puff pastry, and was kicking myself that I had been closing the door to serendipity. How much time I had earlier to prepare for this party? Opportunity favours the prepared mind, and I had failed to fix a problem when it had arose earlier.

I arrived at the train station only to learn I had to wait another 15 minutes before I could travel to the supermarket to buy some puff pastry. It was too long and it wouldn’t work. I started to enter a mild panic, and was clutching at options that might work. It was a classic moment of lacking mindfulness, and being unaware towards a solution within the resources at hand.

I didn’t wait for the train, but instead visited my friend’s bakery nearby. I mumbled something to him about needing puff pastry and looking for a substitute. He responded with the best Korean politeness he could muster, not really knowing what I was exactly asking for or how he might be of help. I could have bought a cake from his shop, but my desire for creative output demanded that I cook for my friends myself regardless of the time available. I searched the internet quickly, and suddenly stumbled across a recipe that might just work.

All of a sudden, a brainwave! The conviction that I could do it! The recipe required me to make a base from thick-crusted bread into which a stewed fruit compote of apples and apricots would be filled. I had nectarines, and decided to use these as a substitute for the apricots.

But let’s just pause in this story for one moment. Why only at this point did I become so certain of my ability? A few minutes earlier I was stressing at the lack of time and ingredients, and saw the task as near impossible to achieve. Self-censoring and worry are such useless actions.

Arriving home with thick-crusted bread, I began cooking with pleasure. The nectarines were crushed in my hands with the juice and pulp messily wetting my fingers. Cutting the apples became a meditative process. My sense of hurry seemed to disappear. The fruit began to change colour in the pot where it was boiling, which was an act of modern day alchemy at its simplest.

I had to cut off the crusts the lovely fresh and thick bread which made the soft, white fluff crush together. A memory of playing with my food when I was a child.

Melted butted was painted into a golden, oily film on each side of the bread using my basting brush. The moist and sponge-like bread was then encrusted in a cinnamon and sugar dust. A bowl was lined, and the compote inserted before baking in a hot oven.

I texted my friend Tony. Time was against me and I was not going to make the lift he had offered. I would meet everyone at the party, and instead travel on the bus. Truth be known, this was my plan all along, and an option I preferred. But why did I prefer to travel alone? It wasn’t really because I enjoyed the solitude, or because I had the opportunity to ‘do some things’. I realised that I was embarrassed of my past failures. I felt like I was all backswing, and no hit.

The irony was that I was focusing on my past failures all the while creating a delicious dessert people would later crave. What is that if not success? It is also worth noting that the success was only possible because of the chemistry that came through the enjoyment of others. No one stands completely alone.

The pie was ready, and came out of the oven. I painted the surface as if my canvas with apricot jam which I had cooked the previous week. My basting brush moved in broad strokes that would be invisible to others. Those enjoying the dessert would only see the completed whole, and not the workmanship involved.

I was ready. Before leaving home for the party, I posted a photo onto Facebook for my friends at the party. I was coming, and had the pie to prove it, even if I was going to be a little late. It was then that I invented this quote to caption the photo: “The artist can never be rushed.”

Later that day while sitting alongside my friend Greg at lunch, we stumbled into a very engaged conversation about this quote in the context of my seeking to make this pie. Reflective conversations are important, and in that moment Greg became more than just a good friend, but a mentor as well. Even the hero’s journey is about the engagement with others. There are no lone heroes. To hit the ball, we first must be playing with others to make our own experiences worthwhile.

Too often, I believe we use the anxiety that comes from the hardship of creation an an excuse that that artist cannot be rushed. This hiding behind delay is complete rubbish. The bottom line is that we must crack on. We must get things done. We must push and strive if epic journeys are to be achieved. And only in ourselves can we become that person who ultimately demands that which comes from within.

This book applies to all endeavours regardless of how artistic you might think that they are.

Delaying and not being rushed are different, and this is the point I am making. Take the time to create, but do whatever you need to do to protect yourself from indulging in unnecessary delay.

Do what you can. You can’t do all things. Seek opportunities for collaboration. Be open to the expansive and generative process of creation. And get on with it. The world needs what you can bring into existence.

This entry was posted in All Backswing, Inspiration and tagged Inspiration.

2 thoughts on ““The artist cannot be rushed” (Chapter 2)”

Ahh Prince Serendipity it happened again, pushing on when the plan is not working out and using alchemy! Glad you found your way to a new creation. A really great reflection.