Last night  revisited a running route I hadn’t taken for about two years- it was like meeting an old friend again.

There had been a lot of changes in that time: a new bridge, some new pathways, public squares looking better developed. And also much was unchanged: the old boarding home still retaining its charm as well as its secrets, the stillness of running over the Parramatta River on Sydney’s harbour late in the evening, the distant glow of the Sydney Harbour Bridge.

I ran along the first half of the course for the Sydney leg of the 10 City Bridge Run last night. Covering 12 km, and then returning along the same route.

Good conditions to run, and started fairly late in the evening which meant that the traffic on the road was light as well.

Pulled up well, and found the distance easy to manage, which is a good sign for the road ahead.

My training run for this Friday. 20 laps of Sydney Harbour Bridge = 24 km. Each lap is about 1.2 km, so the distance is pretty good.

Come and join me if you want- happy to walk a lap with you if you want to take it more gently, or just come and say hello from one of the ends of the bridge. If you want to run a couple of laps, or even just one (or two for the return trip), please leave a comment and I will make sure we meet up together. I will be running between 5 pm and 7 pm, and you will know where to find me…

I like running across the bridge. Great view. The foot traffic around that time might get a little busy, and I will just have to fit in with the crowd as best as I can if that is the case.

Rescheduled my training run of 24 km this week from today to Friday.

Check out a brief video talking about this run:

Saturday evening I headed out for a 24 km training run, but was confounded as darkness fell and I became geographically embarrassed in the streets of Riverview.

For those unfamiliar with Riverview, it is a leafy enclave of a suburb nestled snugly in the North Shore. 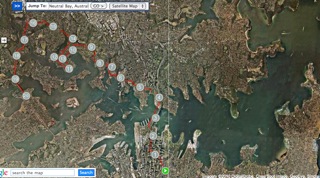 From Riverview you are able to enjoy spectacular views of the Sydney Harbour Bridge, and running at first I saw it over my left shoulder, and then later (thinking I was still headed in roughly the same direction) I saw it over my right shoulder as I looked around to check on surrounding landmarks. As soon as I realised I was going in a big circle I stopped to ask some kids kicking a footy on the street how I might run back to Sydney. They thought that was one of the most ridiculous things they had heard in their life…too far away for running!

Riverview is a privileged suburb, and enjoys beautifully designed large houses, sporty cars, and well maintained gardens. Speaking with the kids playing kick-to-kick I soon discovered there were no buses operating at that time of night, and the nearest train station was miles away.

Not only was I miles away from where I would have preferred to have been, but I became aware I was worlds apart from the situation where people live in extreme poverty- the two environments are almost without comparison they are so completely different.

With no option but to run my way out of the problem, it became a problem solving exercise and a test of mental stamina and toughness that running training develops. After a certain stage in training when fitness has been proven, much of the training becomes more about a competition within yourself: will you blow off training one night? can you run hard when it hurts? will the small niggling pain that you feel (which every athlete gets and endures) eventually make you decide that it is just not worth it?

I worked my way out of the situation and salvaged the run. I passed an unfortunate car prang along River Road and thought that things could always be worse. When I finally was back onto ground I was familiar with and crossing the Fig Tree Bridge, then across the Gladesville and Victoria Bridges, I felt a great sense of achievement known to those who have experienced ‘the loneliness of the long-distance runner’.

As I came off Victoria Bridge, I felt I had proved enough to myself and a bus came tearing along the road, close enough for me to catch back to Town Hall.

For a short period of time I was contemplating: ‘was the seemingly impossible possible?’ The discipline of overcoming small challenges gives us the strength to combat the larger problems we encounter. Maybe this has some relevance to how we can address the situation of extreme poverty: a lesson from the most unlikely of places, Riverview.

Saturday evening I headed out for a harbour run which joins up the land mass through a series of seven bridges. Crossing the Sydney Harbour Bridge first, I headed across towards Gladesville with an intention of coming back across the Iron Cove Bridge and ANZAC Bridge before crossing the Pyrmont Bridge back into Sydney city.

This run is varied for terrain, both undulating and across some scramble goat-tracks tucked within the northern banks of the harbour- a truly beautiful walk if running doesn’t float your boat and you are in Sydney. If you want to take a walk, leave a comment I will give you directions to the best start point for access by public transport. Many parts show wonderful rock walks with plenty of mangrove like vegetation.

I ran counter-clockwise given that I started the run late and I had planned to have reached the Fig Tree Bridge in Gladesville by nightfall (the route is across small dirt tracks before then so going would be made slow by poor visibility after the sun set).

I took longer than I anticipated getting out to Riverview, then because I was used to running this route clockwise I sort-of became lost as you can see by the photo map between 9 and 14 km…a little bit of backtracking.

Read the next post I will write about being ‘Lost in Riverview’ because it was a good experience of having to rely upon the mental stamina and toughness that running develops. After a certain stage in training when fitness has been proven, much of the training becomes more about a competition within yourself: will you blow off training one night? can you run hard when it hurts? will the small niggling pain that you feel (which every athlete gets and endures) eventually make you decide that it is just not worth it?

I worked my way out of the situation and salvaged the run, crossing the Fig Tree Bridge, and then across the Gladesville and Victoria Bridges before catching a passing bus back to Town Hall Station. Ordinarily I would have run the distance back to Sydney, but it was getting much later than I had intended to stay out for, I knew I had covered about the distance I was wanting to train over, and there was nothing to prove by running it home as there were no gains in fitness and probably more to lose in fatigue. I think it was a good judgement call, although some of the passengers might have been less than impressed sharing part of the bus ride with me…

I maintained time of the overall run, no heart-rate data and measured weight before and after the run.

I felt confident across the distance, and am looking forward to the first run in New York on 24 September.

Earlier on 11 September a spirited gang of supporters ran and walked from the Sydney Opera House across the Sydney Harbour Bridge to the other side of the harbour where we enjoyed breakfast. More on that in a following post. 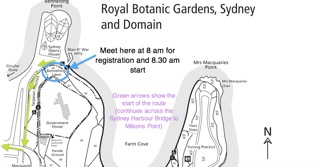 A friend of mine emphatically swears that the expression ‘fun run’ is a non sequitur…he claims never to have experienced a run yet that was fun. Poor soul!

Join us for the Global Launch of the 10 City Bridge Run this Saturday where 100 people will together run 2.4 km from right behind the Sydney Opera House across to Milsons Point, via the Cahill Expressway overpass and the Sydney Harbour Bridge.

Arguably the most picturesque route for a short course in Sydney, and so while the running might not be ‘fun’, it will be a pleasant view. Besides, what have you to lose? Let this be the start of your personal ‘get fit for summer’ regime!

Bring a camera and it would be great to see how you saw the event.

More details are on the Eventbrite page. Please leave a comment or contact me directly with any need of clarification or questions: phone 0438 007 770.

After the last week of relative discomfort in the ankles and calves, I stepped it out tonight for multiple sprints across a distance of 1600 m. I ran at close to ‘race pace’ less so for time, and more to regain confidence in running at speed on legs that were a little delicate in the previous days. I felt in good condition after the long run yesterday.

My course, rather than repeated distances from Mrs Macquarie’s Chair to the far side of the Sydney Opera House, was running 1600 m intervals which took me across the Sydney Harbour Bridge (2 lengths at 1600 m) and returning (3 lengths with one running across the Circular Quay and around the Opera House).

I principally ran across to Milson’s Point to confirm the logistical arrangements for breakfast on Saturday after the launch run. Some details required extra refinement…everything takes effort, and the outcome is the reward. I think it will be a great run on Saturday.

A couple of thank you’s from today:

Tonight a training run of 8 km- set off at a good pace, and feeling good with the previous soreness around the calves. The route was out-and-back from Hyde Park, down Macquarie St and turning to George Street passing through Martin Place. Continuing up Nurses Walk to the Sydney Harbour Bridge and across to Milsons Point.

I opened up to a good pace, a felt some tightness of breath reaching the far side of the Harbour Bridge. I stopped briefly at The Church By The Bridge in Milsons Point seeing they had a “I Heart Kirribilli” display and talked to Des Smith about how the launch event might play out on 11 September. Des was kind enough to offer me two pancakes (delicious!) and after a quick conversation with the locals headed back fresh after a rest stop.

I recorded no time or heart-rate data for the run, and measured weight before and on return. After stretching, I felt fresh for a longer run scheduled for tomorrow.

Was scheduled to run 7 km today, but stepped out on a slow jog and clocked 9 km in total. At the outset I felt fresh although my calves experienced mild discomfort probably due to less than adequate stretching over the past few weeks. I have been stretching for 20 minutes at the end of each session, and feel this is making a difference already.

Given the way my calves were feeling, I took it slow and felt fresh throughout the whole distance. Starting at Hyde Park, I ran down Macquarie Street to circle the Sydney Opera House and run up to the Cahill Expressway overpass. Running to the beginning of the Sydney Harbour Bridge, I descended the stairs and headed to where Hickson Road goes underneath the bridge. I ran along Hickson Road, up to the picturesque Millers Point past the Pallisade Hotel, and rejoined Hickson Road just before Darling Harbour. Continuing to the Sydney Entertainment Centre, I headed up to Liverpool St and finished at Hyde Park.

I did not record time or heart-rate for the run, but did measure weight going out and returning.

Would you prefer if I displayed a map with these blogs of my training log?